A Mosque in Preston

A Mosque on a Hill

On top of a hill there is a Mosque. It is a concrete cube sitting on a concrete plinth. Its minaret and bare brick walls can be seen from miles away. The first time I saw it I was inside my family’s car. I remember my parents talking excitedly, and my brothers making noise inside the car stuffed with all our belongings. We were moving to Preston!

I remember how, as drowsy as I was after a long journey, I first saw the minaret appearing between the trees, as if out of a dream. I suddenly woke and could see the magnificent brick shape, lit by the sun and revealing to me as the car drew the curve along the M55. It was clear the building was squarely oriented towards Mecca and not aligned to the road, which was intriguing to those passing along the motorway and able to see its two sides.

After a few weeks in our new city, my father brought me to the mosque for the first time. My uncle drove us and dropped us at the front whilst he went to park the car with the rest of the family within the concrete plinth on top of the hill. My father and me walked slowly up the access ramp that took us to the open courtyard above, I couldn’t help feeling as one of the pilgrims in the Hajj. When we reached the top, the square was surprisingly open. We could feel the city beyond and hear the passing cars on the motorway, but we were surrounded by tree canopies and birds and felt at peace on top of this concrete plateau, paved with stone.

The main façade was majestic, the bricks were shining under the sun. They looked very familiar, I wondered if they could be the same bricks that some buildings in Fishergate and Church Street had, in the older areas of Preston. There were concrete arches on several levels, inserted in the facades, holding the weight of the bricks above. People were gathering outside so we decided to cross the threshold. The vaulted ceiling welcomed and carried us in, we managed to find our uncle and the rest of the family in the busy foyer, and while the women were already heading to their stairs, my father and I crossed the door at one side of the foyer onto the cloak rooms. A single longitudinal vault joined the coat, shoe and ablution rooms together. My father and I cleansed ourselves before entering the prayer hall. When we were ready, we made our way through. Expecting an exhilarating space, I was disappointed by a dark vaulted space instead, with very tight headroom. My father was preparing his book and his mat and told me to follow him. I could see light beyond the threshold ahead of me. A line of eight arches separated us from that bright space. And when we crossed it, I can’t describe my joy. A soaring space grew just in front of my eyes. Golden domes bathed the space with light, white shiny bricks on the walls and concrete on arched windows to one of the sides brought moving sparkles of light reflected on the surface of a lake beyond, and on the qibla the most delicate mosaic covered the mihrab with green. I could understand now why the low vaulted area was there, it was a buffer that prepared the faithful for this space.

I have come regularly to Friday prayer ever since that day, and I have been able to learn many more details of the building. I know now that it was conceived as a bare cube that contained three interlocking spaces within it. The main prayer hall, at the bottom, grows over three levels and ends on a domed ceiling. The female prayer hall and the library, over the main prayer hall, grow over two levels and end on a vaulted ceiling. An additional level on top of these ones contains meeting and reading rooms. All the spaces are connected visually, so a glimpse of the sacred space is always within reach for the faithful.

Tomorrow I am taking my child to the Mosque for the first time. 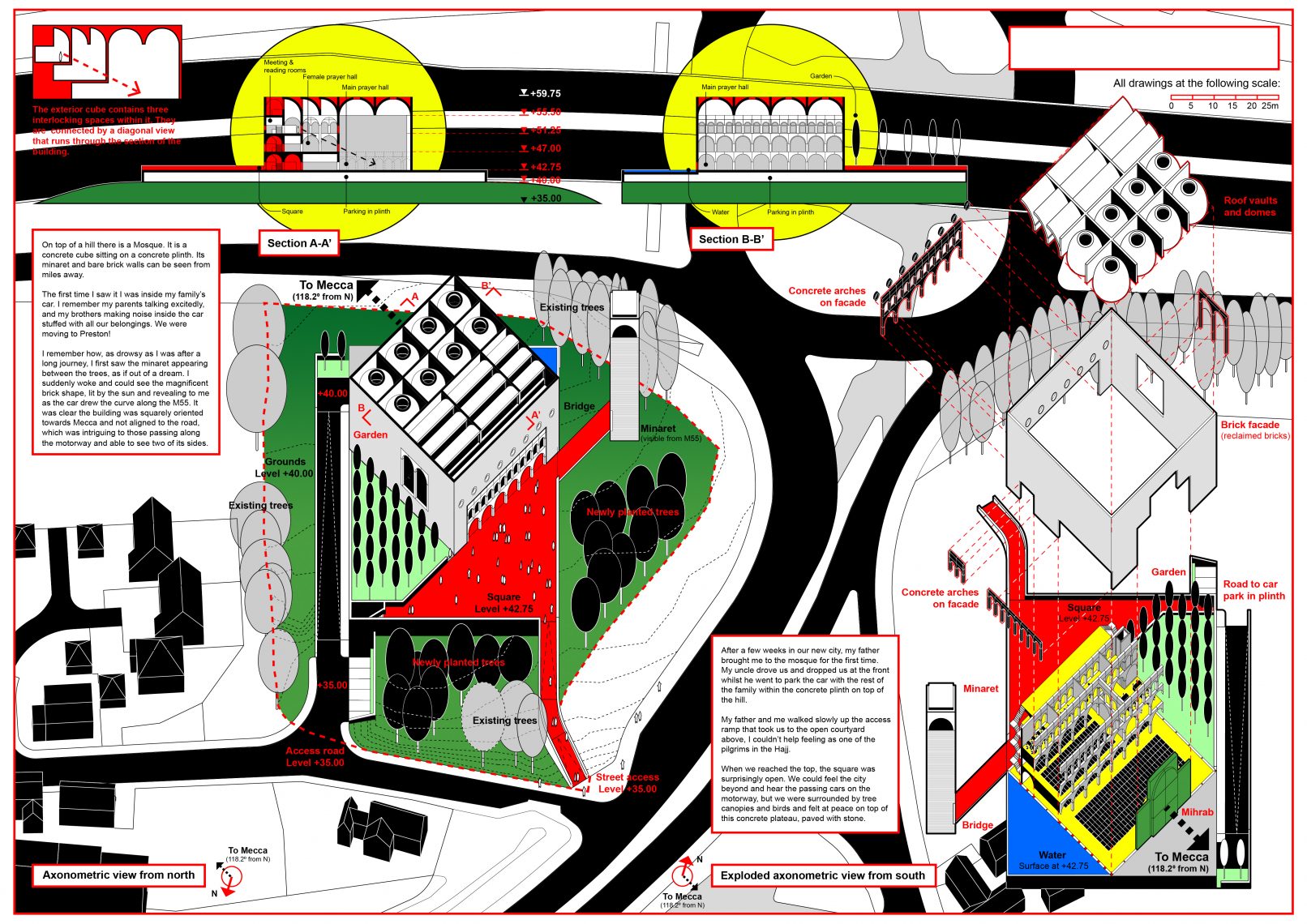 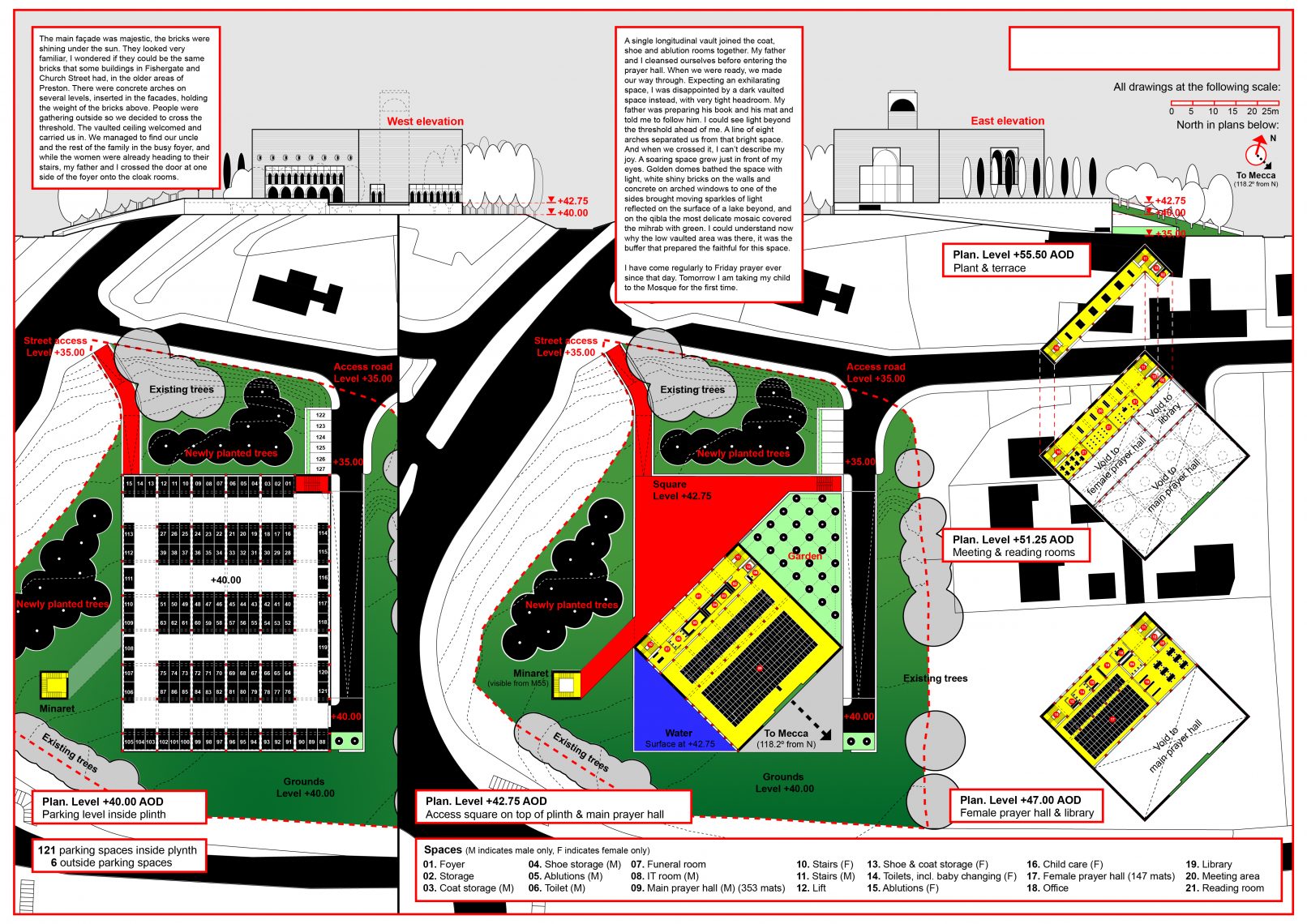 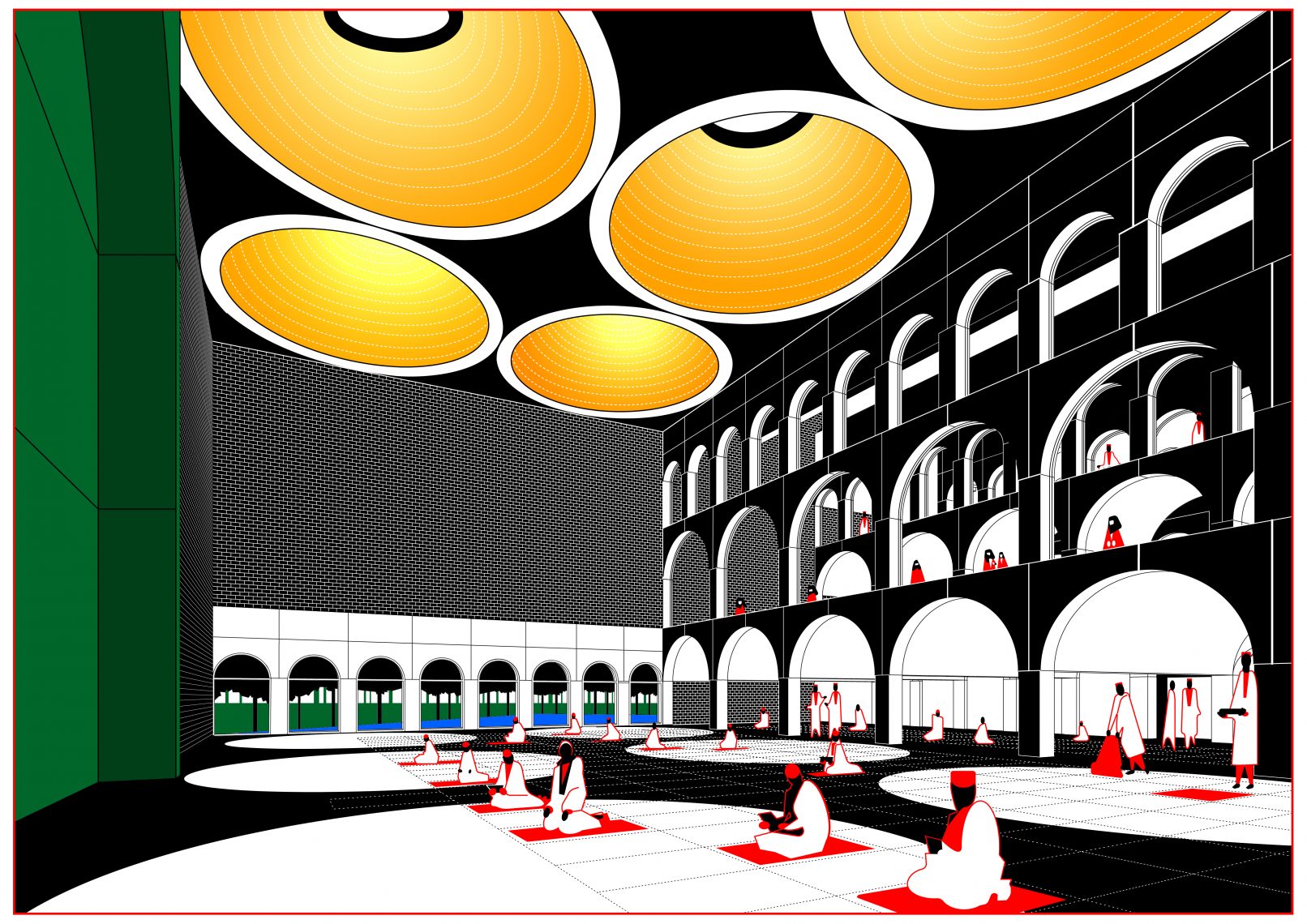